As It Grows, Medicare Advantage Is Enrolling More Low-Income and Medically Complex Beneficiaries 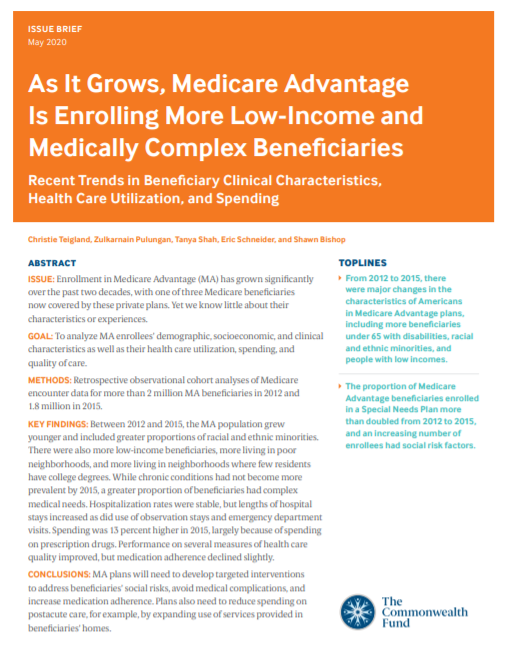 This analysis compared Medicare Advantage (MA) enrollees’ demographic, socioeconomic, and clinical characteristics plus health care utilization, spending, and quality of care in 2012 and 2015, and found significant increases in the proportion of low-income and medically complex MA enrollees. Additionally, an increasing proportion of MA enrollees have social risks for becoming high-need, high-cost individuals.

Between 2012 and 2015, the proportion of enrollees under the age of 65 rose, demonstrating that more people qualified for Medicare due to disability. There were also increases in the proportion of low-income beneficiaries, racial or ethnic enrollees, and individuals living in economically vulnerable neighborhoods. The proportions of people enrolled in both Medicare and Medicaid increased by nearly 40 percent, and the proportion of those enrolled in a Special Needs Plan doubled. Although rates of individual chronic conditions remained steady, in 2015, there were larger proportions of beneficiaries with a high number of comorbidities and indicators of frailty. While some measures of health care utilization remained stable during this time period, there were significant increases in emergency department visits and average hospital stays. Average total spending per member per year increased by 13 percent, largely due to higher spending on prescription drugs, hospital stays, and skilled nursing.

As MA enrollees become more medically complex, low-income, and frail, MA plans should develop strategies to meet the needs of these vulnerable populations, such as expanding home-based care and management of care transitions.

VIEW THE RESOURCE
Posted to The Playbook on
June 11, 2020
Population Addressed
Adults Under 65 with Disabilities
People with Advanced Illness
Frail Older Adults
People with Multiple Chronic Conditions
People with Behavioral Health and Social Needs
Key Questions Answered
Level of Evidence
Promising
What does this mean?

How Can the Playbook Help You Improve Care?